It has often been said that being recognised as a talented footballer on the Isle of Wight, is not the easiest job in the world.

Down here off of the South Coast of England, it is hardly a footballing hotbed of talent, not that there isn’t talent, but for obvious reasons the opportunities for young Islanders to shine aren’t as readily available as it is for kids in London or the North West.

Links to the Island have traditionally come from the South Coast Clubs, Saints and Pompey have both run initiatives and scouting programs over the water and Bournemouth have also given many youngsters the chance to make a name for themselves, but still relatively few set the world alight.

Having said that several have made the grade and gone on to achieve great things in the professional arena. In fact we even now have a professional manager amongst our Island alumni. Lee Bradbury has had an impressive start to management after hanging up his boots and replacing the outgoing Eddie Howe at AFC Bournemouth, seven games in and Bradbury is yet to taste defeat as it becomes more of a case of Eddie Whoe at Dean Court!

Cowes born Bradbury is probably the most prominent of the Island pros, making the step up back in 1995 with Portsmouth. It was in 1996/97 season though that he really launched his career, his goal output in a struggling Pompey side was enough for Frank Clark to invest £3 million to take the Islander to Manchester City. While the move may not have worked out exactly as he would have liked, it was a monumental milestone for Island footballers, especially as it was soon followed by an England U-21 call up, and Lee wasn’t finished there. Going on to make over 500 football league appearances including spells for clubs as prominent as Birmingham City and Sheffield Wednesday before opting for the dugout at Dean Court this year, versatility played a key part in a long career, a player that started off very much a striker used his experience to perform in midfield and at full back in the latter stages.

Lee Bradbury - The Cowes Special One? Picture courtesy of afcb.co.uk

While Bradbury was forging the early stages of his career another Islander was progressing in the youth team at Bournemouth. Sandown lad James Hayter used a loan spell at non-league Salisbury City to show the Dorset club what he could do, and soon found himself a first team regular.

His impression on Bournemouth manager Sean O’Driscoll was notable, as soon after he moved from Dean Court to Doncaster Rovers he broke the Yorkshire club’s transfer record to take Hayter with him. It was here that Hayter had his finest moment, when he headed Rovers into the Championship, scoring the solitary goal in the 2008 League One Playoff final at Wembley.

The year 2000 saw two Islanders hit the local headlines, Lewis Buxton from East Cowes and Shaun Cooper from Newport both signing professional terms with Portsmouth. Buxton made an almost instant impact, earning rave reviews while still a teenager in Graham Rix’s side.  Unfortunately, both players were victims of a policy that didn’t involve the use of the clubs younger players when Harry Redknapp took over, both players spent spells away on loan before moving away permanently in 2005, Buxton to Stoke City, Cooper to Bournemouth.

Lewis’ stay in the potteries was interrupted by injuries, but he still managed to play 50 games before a loan spell at Hillsbrough became a permanent move, where now he is the first choice right back for Sheffield Wednesday.

Cooper made himself at home with the Cherries and captained the side through both the difficult points deduction season and the following promotion campaign. 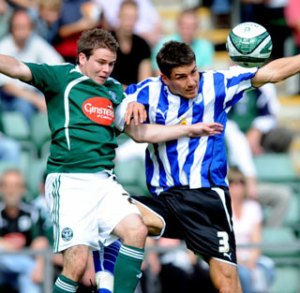 It was also the youth system at Pompey that saw the emergence of another Islander, Gary Silk, now plying his trade for Blue Square Conference side Mansfield Town via Notts County.

Islanders have fared less successfully at the Southampton Academy, famed for it’s production of top players. As recently as the start of this season Island youngster Tom Dunford was released by the Saints, while Lake born Goalkeeper Simon Moore may have felt his chance of a career in the professional game may have passed him by after his time there. Moore though now finds himself on the books of League One Brentford after biding his time at Brading Town and Farnborough. Moore is now Wembley bound after the bees reached the final of the Johnstones Paint Trophy. While Cowes lad Aaron Martin had to “do it the hard way” via Non-League clubs before signing for Southampton last season.

Though not a born and bred Islander former Cowes High student Gary Rowett got as far as the Premier League with Everton in the mid nineties, matched by Jamie Lawrence who went from Westwood Park to the likes of Leicester City, all be it that his stay on the Island may not have been through choice……

From a county that boasts just 140,000 people, our contribution to the sports professional ranks isn’t really that bad. The biggest hurdle faced by Island footballers certainly isn’t the stretch of water that separates us from everyone else but the number of local clubs and the size of the local leagues which seem to dwindle year on year. Add to this the reduction in efforts of clubs like Portsmouth because of financial issues; it might be more difficult than ever to shine.

Hopefully all the names mentioned above will show talented kids that location can mean nothing if the dedication to succeed is there and certainly not to give up.

Promote your Page too